Command Chief Master Sergeant Kevin J. O'Gorman, served over 37 years in the United States Air Force and the Texas Air National Guard from 14 January 1974 through 1 March 2015. He served his community, the State of Texas and the United States of America with great distinction and honor. Chief O'Gorman completed Basic Military Training and Aircraft Maintenance School, and his first assignment was as a Crew Chief assigned to Japan.

Upon his return to the United States he was assigned to Bergstrom Air Force Base, Austin, Texas, where he worked as an Aircraft Maintenance Specialist on multiple assigned model aircraft. In September 1984, he enlisted in the Texas Air National Guard, 136th Airlift Wing, and was hired as a full time Technician Aircraft Maintenance Specialist. While assigned, Chief O'Gorman was forward deployed to various locations in support of several Joint Operations including; Operation Volant Oak, Southern Watch, Desert Shield/Storm, and Provide Comfort.

His state activations include humanitarian missions during multiple natural disasters. He participated in two Volant Rodeo competitions, with one taking second place in the world, and first in the Air Force. In 1991, he was selected and trained to become a Flight Engineer Technician and was assigned to the 181st Airlift Squadron.

Within that first year, he became an Instructor for Flight Simulator Platform for Aircrew and a Group Training Manager. He participated in the following deployments: Operation Provide Promise, Operation Joint Endeavor, and Operation Southern Watch. In July 1998, he was elevated to Evaluator and moved into the Groups Standards and Evaluation section.

Chief Master Sergeant O'Gorman helped lead the Squadron for its call to active duty in February 2003. He was then deployed in support of Operation Enduring Freedom and Operation Iraqi Freedom. During the five years to follow, he was deployed six different times, in tow of those locations Chief O'Gorman was assigned as the Deployed Operations Group Chief.

Chief O'Gorman served as the Vice Chairman and then Chairman of the 136th Airlift Wing Chief Council. He assumed the duties as the 136th Airlift Wing Command Chief Master Sergeant and served as an invaluable liaison between the Wing Commander and over1,200 enlisted personnel. On March 1, 2021, he assumed the duties as the 11th State Command Chief Master Sergeant for the Texas Air National Guard. Through his leadership he directly impacted the lives and missions of over 2750 Texas Airmen. He facilitated the consolidation of the Texas Domestic Operation under one command, this initial step resulted in the opportunity for a Texas Air National Guard member to serve in the Senior Enlisted Advisor/Command Chief billet for Texas Domestic Operations for the first time in Texas. Chief O'Gorman helped spearhead the activation of the "Air" personnel for Operation Strong Safety, a 34 million dollar, 1000 plus troop state deployment to the Texas border.

Overall the creative ability, exemplary foresight and devotion to duty consistently demonstrated by Chief O'Gorman resulted in increased effectiveness of the Texas Air National Guard. His consummate leadership and guidance will have a lasting positive impact on the State of Texas and the United States Air Force. 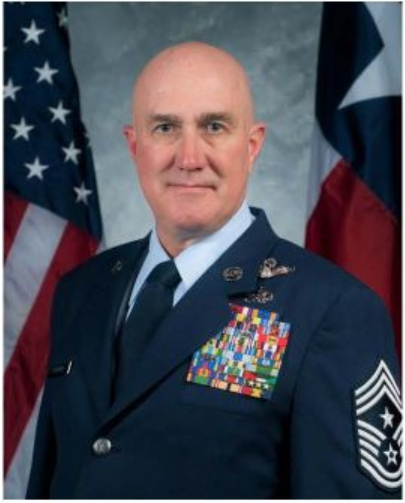