Major General Joyce L. Stevens served over 30 years in the United States Army and Texas Military Department from April 1979 through June 2013. She served the nation with distinction during peace and war for 34 years, culminating in her dual hat assignments as Texas National Guard Assistant Adjutant General-Army and Texas Army National Guard Commander. Her service was characterized by extraordinary devotion to duty, selfless service, dynamic vision, exemplary car of Soldiers and their families, and innovation leadership. General Stevens began her distinguished service to the nation when she enlisted in the Idaho Army National Guard. Her assignments included various command and staff positions within the 49th Armored Division, 36th Infantry Division (Light) and 71st Troop Command. She served as the Commander of the 536th Forward Support Battalion; the Assistant Chief of Staff, G4, for the 49th Armored Division (Rear); 71st Troop Command Assistant Chief of Staff; G3: and the Commander of 111th Area Support Group when she deployed to Afghanistan as the Commander in support of Operation Enduring Freedom.

In July 2006, General Stevens was the first female to be promoted to the rank of Brigadier General in the Texas Army Nation guard. As Brigadier General, she was assigned as the Deputy Commander-Army where she was handpicked to lead the Training Validation Team for deploying Soldiers in support of Operation Jump Start and Operation Lone Star. She was directly responsible for shaping and approving the comprehensive training plan and validated over 1,500 Soldiers/Airman who deployed to the border.

Additionally, she undertook developing a proposal for restructuring the Texas Medical Command, outlining a joint structure to serve both the Army and the Air Guards. During this time, she was selected for a dual hat assignment as Commander, Joint Task Force for Defense Support to Civil Authorities (DSCA). She provided oversight and supervision for training and operations for 18,000(+) Texas Soldiers.

In October 2007, she was selected to serve as the Deputy Commanding General-Support( DCG-S) 36th Infantry Division and was the first woman in the nation to serve in this position. As the DCG-S, she provided oversight of four brigades ensuring they excelled in training, administrative, and logistical support, and critical deployment support to OIF and OEF missions. Her exemplary leadership, strong attention to detail, superior standards and emphasis on maintaining and improving the Divisions Key Readiness Indicators produced highly commendable results. She was also given the task of assisting the transformation of Texas" DSCA Joint Task Force into the Standing Joint Interagency Task Force. She also served as Chairperson of the National Diversity, Equal Opportunity, Equal Employer Opportunity Committee, and was responsible for the National Diversity Conference.

In March 2009, she was appointed as Texas Army National Guard Assistant Adjutant General- Army and Texas Army National Guard Commander. She commanded a force of approximately 19,000 Soldiers and 119 facilities. She championed programs designed to ensure families are strong, marriages are enriched, and military children reap the benefits of their parent's service. She kept focus on Soldiers and families and was personally involved in building the networks necessary to ensure our veterans, particularly our wounded warriors, receive the care and attention that they deserve. General Steven's reputation for excellence and genuine compassion for military personnel and their families translated into major contributions to the Texas National Guard, the State of Texas and the Nation. She is a tireless champion for her soldiers and has a true service before self attitude. 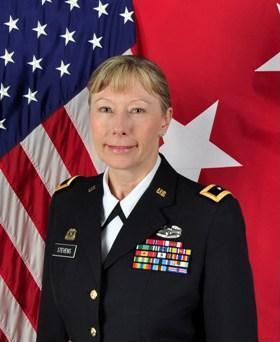